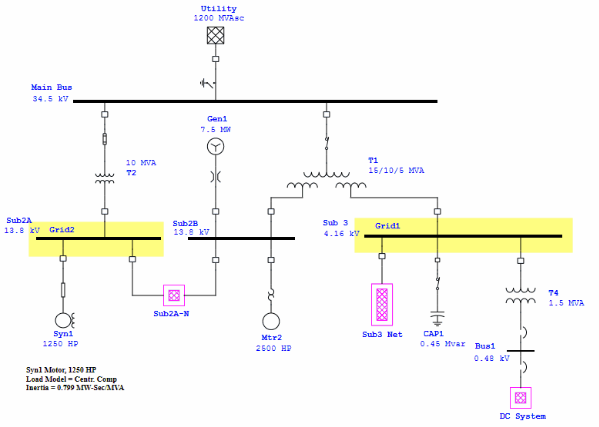 b) To plan the future growth of both loads and generation

c) To determine the best economical operation for existing systems

e) To help identify the need for additional capacitive or inductive VAR support, to maintain system voltages within acceptable limits

Required input data to carry out the load flow study

Most load flow programs perform their calculations using a per unit representation of the system rather than working with actual volts, amperes, and ohms. Selecting the nominal voltage to be the base voltage simplifies the analyses and reduces the chance of errors in the interpretation of results

Buses represent the nodes of the electrical system and can be classified based on their conditions of load and/ or generation. The bus data describe each bus and the load and shunts connected to that bus. Bus ID, name, and/or number, Bus classification (swing/voltage controlled/load bus), Bus service (in/out) status, Bus nominal voltage, Bus rating/continuous amps, Initial voltage, and angle

In a load flow simulation, the voltage magnitudes and phase angles of load terminals are calculated and they change according to overall loading and network conditions.

The load data are used to represent the load at various locations.

Standard to be used

In all the realistic cases the Load Flow analysis cannot be solved analytically, hence iterative solutions implemented in computers must be used for the analysis. The Consultant has used ETAP version 21.0.1 for carrying out the simulations.

Predominantly there are three main iterative numerical methods to solve non-linear algebraic equations which are.

It should be evident to designers and operators of industrial and commercial power systems, as well as to utility system engineers, that a tool that predicts the actual performance of their electrical systems (under various steady-state operating conditions) is very valuable and essential for the short- and long-term operation of the power systems. That is why load flow is called “the mother of all studies.” Load flow analysis is used to conduct conceptual design, and to determine equipment size, transformers tap settings, switching interlocks logic, operational limits, etc.

Hit enter to search or ESC to close